Now a padded board book! 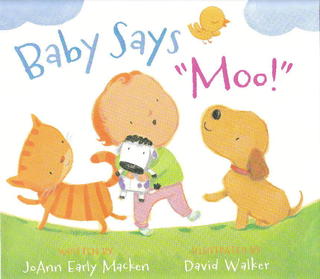 Publishers Weekly, January 24, 2011
Baby Says "Moo!"
JoAnn Early Macken, illus. by David Walker, Disney-Hyperion, $15.99 (32p) ISBN 978-1-4231-3400-8
Whenever Baby's parents ask what sounds randomly encountered creatures make, Baby has one answer: "Moo!" "A cat says moo?" respond Baby's parents, with a mixture of mirth and bafflement, and with each incident they recount their toddler's misguided answers. "I can't see how./ Everybody knows a cat says meow./ A bird says tweet,/ and people say hello./ A cow says moo,/ everywhere you go." So is Baby (a) just being a goofball; (b) practicing for an actual cow sighting (which occurs at book's end); (c) giving multiple shout-outs to its purple-spotted bovine lovey; or (d) slyly subverting the parents' attempt to turn every encounter into a teachable moment? While readers debate the answer, they can have a jolly time performing Macken's (Waiting Out the Storm) chipper rhymes; there's just enough variation in the text to keep the running joke fresh, and kids should get a kick out of contributing their own hearty "Moo!" on cue. Walker's (No More, Por Favor) winsome acrylic illustrations are right in synch with the sunny silliness, portraying a world full of baby-loving animals and cheery, pastel-colored stimuli. Ages 1–5. (Mar.)

Kirkus, February 1, 2011
BABY SAYS "MOO!"
Author: Macken, JoAnn Early
Illustrator: Walker, David
Macken carefully structures a seemingly simple picture book about a baby learning animal sounds—or in this case stuck on the popular bovine one—using simple rhyming text, a progressive repetition of previously encountered creatures and the harmonious refrain of, “Baby says, “Moo!” Walker complements the story with muted bright hues portraying the sunny dispositions of baby and parents as they journey to various settings from urban store to rural farm. In the mostly blue text (set in a type that looks like hand printing), animal sounds are printed in contrasting purple and coupled with a miniature picture of the sound’s owner. "A cat says moo? / I can't see how. / Everybody knows that / a cat says meow. / A bird says tweet, / and people say hello. / A cow says moo, / everywhere you go" these simple lines are accompanied by tiny thumbnails of cat, gray-haired woman, bird and cow. In less-deft hands this could be an annoying distraction, but here it only enhances the reading experience for young ones. A lady, bird, cat, horse and dog are included in this gentle romp, which concludes with a finale meeting—“Wake up, Baby! Here’s a cow for you!” Sure to satisfy young toddlers with one-on-one reading and entertain preschoolers in an interactive storytime. (Picture book. 1-3)

Booklist, February 1, 2011:
Baby Says “Moo!”
Macken, JoAnn Early (Author), Walker, David (Illustrator)
Everything about this picture book—concept, story, appealing art—is pretty much perfect for the two-and-under set. In the grocery store, the customers wave and call hello to Baby, but when Mom and Dad ask what people say, Baby replies, “Moo!” That sets the stage for a series of amusing episodes in which Baby answers “moo” to the question of what the other creatures they meet say: the pretty yellow bird, the horse, the dog, the cat. But once the family gets to the country and a cow appears, Baby can’t give her signature “moo” because she’s fast asleep. The cumulative text is written in nicely scanning (and delightful!) rhyme that toddlers will enjoy. Fruit-juice colors and people and animals drawn in the rounded shapes of stuffed toys dominate the spreads, except in the sidebars of accumulating tweets and meows. Kids who are just a bit older might spy the reason that Baby says nothing but “moo,” making this a fun outing for the whole family.
--Ilene Cooper

School Library Journal, March 1, 2011:
MACKEN, JoAnn Early. Baby Says “Moo!” illus. by David Walker. unpaged. Hyperion/Disney. Mar. 2011. RTE $15.99. ISBN 978-1-4231-3400-8. LC number unavailable.
PreS–A family shops for groceries and then takes a ride to the country for a picnic. “Baby takes a ride/through the busy, dizzy city,/waves at a yellow bird/singing so pretty./Baby, what do birds say?/Baby says ‘Moo!’” As they pass different animals, the parents ask their baby, who clutches a toy cow, what each creature says, and Baby always answers “Moo!” Finally, after the child has fallen asleep, they see a cow: “Wake up Baby! Here’s a cow for you!/ Baby, what do cows say?/Baby says ‘Moo!’” The rhyming text reads smoothly, and the acrylic illustrations are childlike and cheerful, making the book exactly right for toddlers. Each time a new animal is seen, the parents reiterate the names of the previous creatures and their sounds, inviting participation. The text, set in a blue font resembling a child’s handwriting, emphasizes the animal sounds in red. A winner for the youngest listeners. –Judith Constantinides, formerly at East Baton Rouge Parish Main Library, LA